Social media is here to stay but how much is it affecting the lives of people in Alaska.

The theme in Alaska at this time of year is racing - skiing, snowmachines, long distance mushing and sprint racing.

The Last Great Race is now tracking its last few mushers and their teams for the finish line in Nome. 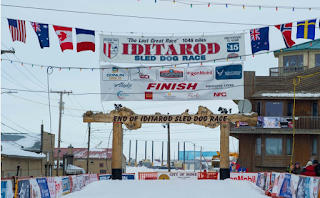 This year's race had rules changes that allowed the mushers to carry satellite phones,cell phones and ipads.  The new rules was instituted to address potential safety issues.  This change is partly due to a snowmachine injuring two mushers and some of their dogs in the 2016 race between Koyukuk and Nulato.  The inclusion of satellite phones may have given the injured teams a better response time for support.

Many fans and participants had mixed feelings about the rule change.  However, race participants thought they would not have time to try to log into internet but use the devices for photos, alarm clocks, and music sources.  Mushers are pretty busy taking care of dogs, feeding the dogs and themselves and making the required contacts at the check points where internet might be available.

The rule change did not appear to have any affect during this year's race.

In the sprint mushing world the situations are pretty much the same, the racers might listen to music or the radio but don't really have time to log on to facebook or other social media sites and gain or give advantages to other racers.  They have always used radios to listen to placings and music during the running.

Social media for personal use is very hot these days.  In the heat of the presidential election facebook and twitter were alive with political opinions, organizing and protesting.  How did these formats affect voting and/or engagement national and local politics?  From my perspective in the field I found that it required more time on task weeding through all of the opinions to find out what information was factual or opinion.  You even see the newscasters using social media to share trending of the public during the news shows.

I am still determining how much I want to engage in social media and what potential use it may be to me.  Will it save me time?  Not in terms of public issues, but for keeping in touch with friends and family and even at work, it is really a time saver.

I will continue to learn more uses for social media and have already utilized some devices to be more in touch with people through my work.

Very thought provoking Heidi.  It seems as though the race wasn't hindered in any way including technology since a new record time was posted.

I particularly agree with you on the potential personal usage of social media.  I also use it primarily for staying in touch with family and friends.  I would like to utilize it more in my work, however, how that will look remains to be seen.

You need to be a member of Lone Eagle Academy to add comments!